Super Spin Tanks - Get It On Your iPad!

I know, I’m pretty late with that one, what with it being nearly February n’all.

But if you think I’ve been remiss with my new year greetings, that’s nothing compared to my tardiness when it comes to saying GO TO THE APP STORE AND GET SUPER SPIN TANKS NOW! 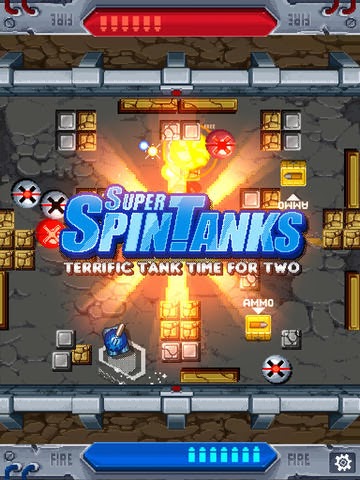 It’s a two player game of total tank dueling awesomeness. Yes, you’ll need a friend play it with, but that’s not a problem, because introducing a total stranger to this game will instantly make them your friend. You each control a tank around your own half of the screen, tapping where you want it to go. And you have a stack of shells to fire at your opponent, which you unleash by tapping on your magazine.

That makes it all sound so easy, but your turret is constantly spinnning, so you have to tap fire when it’s pointing in the right direction. There’s a bunch of arena layouts, weapons and play options to keep you playing for… well, ever really.

You mean freemium Jon, with some devilish upsell somewhere in the mix. No, I mean actually properly free. No sting, neither visible nor hidden beneath the surface, this is REAL FREE!

This is normally where I put stuff I worked on but Super Spin Tanks really has nothing to do with me – I contributed nothing to its creation other than encouragement, and some confusion.

I did get to play test it a lot over the course of 2013 though, which pretty much amounted to the most enjoyable lunch times it’s possible to have.

It’s rare that anyone can truly say “my game” without making someone else feel forgotten and under-appreciated. But Super Spin Tanks is the creation of just one man, Peter Freer, who did everything, including the music.

I salute you Pete Freer and your wonderful game.

Once again GO TO THE APP STORE AND GET SUPER SPIN TANKS NOW!