The 14th of March saw the release of Ridiculous Fishing, and despite looking forward to its release and counting down the days I got completely distracted by cricket. (England vs New Zealand in Wellington, a total win win for an English ex-pat who's lived in NZ for 5 years. And literally a win win, as rain stopped play and it was a draw.)

Anyway, come Monday 18th, and just a few days after the release I got an email of my former colleague, PikPok art director and superior game design mind Peter Freer, telling me how much he loved Ridiculous Fishing and had completed it. 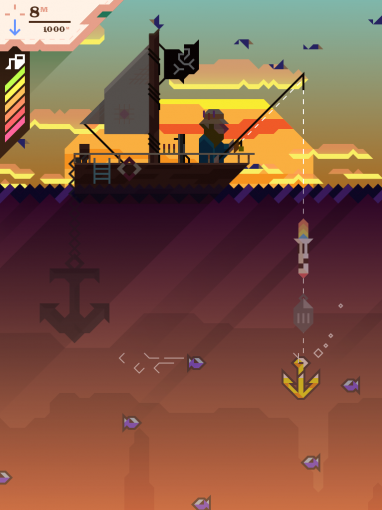 Naturally, I scurried home at the end of the day and set it downloading on my iPad. I then proceeded to play it for an hour, despite being pretty hungry when I arrived home.

Two nights later I was up late submitting an app to Apple and couldn't sleep when we wrapped up the process around about 1am, so I played some more Ridiculous Fishing. Two hours later I thought it might be best to get some sleep.

The next night I completed the game, well, sort of.

I'm being deliberately vague because I don't want to spoil it for anyone.

The controls for the game are pretty simple - you tap to cast your line which then your hook descends through the water in a one screen wide gully. You tilt your device left and right to move the  hook left and right dodging fish, for as soon as it touches a fish it starts going up again, and you again can tilt left and right to hook as many fish as possible before the hook gets to the surface, whereupon all the fish launch into the air and you have to shoot them.

The further down you can get your hook without colliding with a fish the more fish you can have the chance to hook on the way up. There's also quite a variety of fish in the game, and the deeper you go the more different fish you will see and catch. To complete the game you also need to get the hook all the way to the sea floor. So, whichever way you look at it, depth matters.

I'm not particularly keen on tilt controls, so for me to like a tilt controlled game so much takes some doing. For one, tilt controls can be extremely frustrating and making them feel good is not a trivial thing. The most common type is the form seen in Doodle Jump, where tilting in one direction sends the protagonist arcing off in that direction, and the more you tilt the faster they go. Return the device to vertical and the protagonist returns to moving in a straight line.

Doodle Jump is an old game, by iOS standards, but it's still an excellent example of making such controls feel good. The most important thing to get right is the inertia on the player's character, which defines how quickly you can make it change direction, either switching the direction of travel from left to right or right to left. PikPok's Bird Strike suffers from too much inertia in the turn, which seriously hampers the feel of the game. As I was the senior designer at Sidhe (PikPok's parent entity at the time) I have to accept some responsibility for this, as I didn't spot the problem at all, although I don't understand why PikPok doesn't fix it in an update.

But Ridiculous Fishing doesn't work like that, instead each angle of tilt corresponds to an exact x coordinate on the screen. Holding the device vertical sends the hook along the centre of the screen, and any tilt to the left or right aligns to an exact path, not a drift in that direction, as shown in the diagram below.

Temple Run uses these controls too, but it's hard to appreciate on the narrow channel you run along. Again, inertia plays a part, the hook doesn't move instantly from one x co-ordinate to another, but the speed of manoeuvre that's possible is incredible, allowing me to thread the hook through the slenderest of gaps more easily than I could possibly imagine normal inertia controls.

So, even if you, like me, don't usually like tilt controls, I strongly recommend you play Ridiculous Fishing.