You Wake Up To Marmageddon!

Earlier in the year I had an idea to make a game that was a little like Scrabble, but with an entirely different theme. Through various avenues of thinking I ended up with quite a different game, although there were still tiles with various values on them. 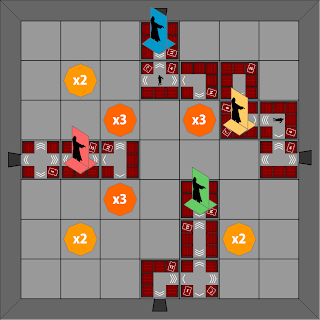 I then presented this game to my good friend and artist Peter Freer, and after some play testing he suggested some very shrewd and significant changes.

Not long after I was wrestling with problem with my Masters level students - how to teach them the value of making their games as fast as possible and then spending as much time as possible tuning them.

Aha! I thought, the game with the tiles, I can use that, because it's finished.

Using the version I presented to Pete (not the modified version after play testing with him) I got my class playing and changing, letting them change one thing after each play.

The process got the point across and I think it's fair to say that we were all pleased with the results.

The game had a dungeon theme, which was chosen originally simply because the fantasy setting lends itself well to pretty much any games you want to try.

But then it occurred to me I could re-theme it into a zombie game, to fit in with my "Bill Johnson - Zombie Issues Specialist" universe, which is set in New Zealand. Aaand I could also tie it in with the unusual Marmite famine which has beset this fair nation in the wake of the Christchurch quakes.

So, if you want to print and play this board game, you can find it here.