Zombie Sandcastle and its Business Model

Help me figure out whether my latest game should be free, proper free, not that freemium hogwash.

I spend a lot of time thinking about business models. And you’ll find it almost entirely surprising to find out that I quite enjoy it. This is just as well, because the modern game maker can’t really avoid the subject. As a game designer and producer I certainly can’t just avoid ignore it, I have to tackle it head on. Nowadays games don’t go away when you launch them, they linger, further begging for attention, and hopefully giving some revenue in return. This is problematic for the producer in me, but the complication of post release scheduling is nothing compared to what my game designer self has to contend with.

It’s not just a case that game designers have to worry about the business model, the business model is now a major part of the design. Even the simplest approach to the problem – we will sell the game for a price, the end, is a decision that can’t be made easily for most of us. Without having to tune any game component for retention or monetisation you reduce the number of moving parts in your design, making it possible to tune them faster; it’s more like juggling handkerchiefs than cats, it’s relatively easy. Although, if you get it wrong the handkerchiefs might turn into chainsaws and chop off parts of your body you quite like. Adding stuff to a paid app is still something you’re expected to do, but if you balance your game in a way the audience hates then they might see any post release tinkering as a sign that you were prepared to take their money before you finished the game, which can seriously lower their opinion of you, and your game may never recover, no matter how good your updates are.

Freemium games don’t suffer so much from this; if you’re making one of these then your audience already has a lower opinion of you.

Only a small percentage of players have this lower opinion because they think you’re a bad person. Those folks are often those that like their games to be more of a challenge and not just an activity, and they already think you’re destroying the very fabric of the universe. Those that do see games as more of an activity than a challenge, what we commonly call casual gamers, despite there being nothing casual about the amount of hours they play games for, have a lower opinion of you simply because your game is something they enjoy, games to them are not necessarily a pre-eminent form of entertainment, they are just a type of entertainment. They’re pretty sure you play games all day, in fact.

So there’s paid, and there’s freemium. Not that freemium describes any one business model, there’s a myriad of options within the confines of its meaning: You can have micro transactions, where folk pay for hats. You can have adverts, which you might be able to pay to get rid of. Hard pay walls, which really just make your download a demo with an IAP unlock for the full game, or alternative pay walls, where you can annoy your friends on Facebook instead of paying. You can have buy everything for ever options, which are really good for kids games. Or the whole thing might be an advergame, which is really just the same as a game supported by many adverts, although you hopefully get paid up front. Pump and play has been brought back from the graveyards of the video arcades of my youth to be the new king of the hill (see what I did there, I apologise, but I’m not hitting backspace). There’s even the 72oz steak model where you attempt a challenge and only pay if you fail. And there’s a thousand twists on these and a whole world of ways of putting them together.

If anyone ever says they’re using a freemium business model and fails to clarify the details of what that means then they probably don’t know what they’re talking about.

There are also subscription models, but for the game I’m thinking about I really can’t imagine that being a goer.

I’ve downloaded Minecraft three times now, twice on mobile touch screen devices. Now, I wouldn’t say that Minecraft isn’t still highly enjoyable on my iPad but nor would I suggest it was designed for the device, we all know it wasn’t. And we all know that although mouse and keyboard might not be the most accessible control set up, it is the best. (Rest in peace Doug Engelbart, your invention is one of the greatest tools ever devised).

So a few months ago I decided to sit down and design a construction game for touch devices. Naturally I began with the fundamental question – how do I interact with the world? Even on a touch screen device there are a few choices here: Taps, swipes, drags, they’re all available but when it comes to construction, the obvious interaction for me was drawing. It probably helped that I do enjoy drawing on the iPad, and just with my finger, which doesn’t necessarily create great results but I enjoy it nevertheless. Perhaps the pencil in my hand also helped… curiously my mind then went to a destruction game, Where’s My Water – in that you’re always taking away, never adding to the landscape. But what if you could do both?

For me some games are pointless in 3D, one is Lemmings, the other is Worms, both of which used a destructible landscape layer in which all the action takes place. Thoughts of those two games set my scale all of a sudden and I was thinking about little dudes wandering around the landscape, and ones I couldn’t necessarily control directly.

Like a goddamn fool I’ve never learnt to code and instead noodle around with various game creators that infuriate me. One of which is Scratch, which is made and maintained by folks at MIT and is designed to allow kids to get into programming. It has a bunch of drawing functions in it and is able to run some rather interesting collision checks based on colour.

Years ago I made a little lunar lander game using Scratch and realised I could define the landscape as one solid colour for the lander’s collision to check. And doing that also meant I could have a single colour for the BG and have meteorites strike the landscape and overdraw the ground in the BG colour, forming craters. Because the lander was checking for hitting a colour it could then enter these craters. I was pretty pleased with myself.

Then, a couple of years later I tried to make a two player game that used the same landscape destruction technique but gave the players (it’s a two player game) have control over construction and destruction of the terrain. They also control little characters getting down to the scale of Worms and Lemmings. And they jump between asteroids, which they can also blow up, but that’s not important right now.

So I could imagine how to actually make a prototype of this construction game in Scratch. Which was kind of a pain, because then I had no excuse for not doing it. That first lunar lander game had actually been set on Mars, so I had an idea of the landscape being sand – remember, my technique only really works with a solid BG colour and a solid landscape colour. Naturally, sand deserves a beautiful blue sky. Now I was thinking about sandcastles. I’ve had a Lemmings-esque castle defence game in my head for donkeys years now. So all of a sudden I had little guys defending a sandcastle rather than a real castle. I don’t know where the zombies came from (does anyone ever really know where the zombies come from?) but I suddenly had a design for a game which had named itself Zombie Sandcastle.

I made a prototype in Scratch and found that I had a game I really enjoyed playing and despite the environment not really being fast enough to do it justice, and really not being able to implement everything I wanted to, I found it all oddly hypnotic. This is not common in my experience. How many of you have made prototypes and found them to be promising but not compelling? I’ve been involved in a lot. Most importantly I’ve made a lot in Scratch and none have made me have “just one more go”. But Zombie Sandcastle did.

Of course, I might have made a game that only I could possibly be interested in. But I can see the potential. And I decided to run an Indiegogo campaign to see if I could raise some cash to move the whole thing into a better state, which can be built on over time. Naturally, I’ll be hiring a skilled programmer for this task.

Which brings me back to business models. You see, I was there wondering what business model I should use for a release version. Should it be a one off payment. That would work. But I could also imagine some quite interesting alternatives – I especially like the idea of selling catalogues of new gear like Steve Jackson used to do with Autoduel Quarterly for Car Wars. Of course, that was a tabletop game, but it was a really neat way of presenting new things.

But then I heard something interesting about the history of crowd funding. It turns out that someone once postulated the idea that software might be produced on a purely crowd funded basis, with the intent of releasing the product for free, thus negating any concept of piracy. That idea resonated with me quite strongly and it suddenly seemed to me that I was being a bit of a twat, asking the general public for money and then thinking I could have a second bite of the cherry and make money from a different avenue.

So the game should be free if its development is crowd funded. But then, isn’t that unfair on my backers, one of their perks being getting a copy of the game?

What do you think? Do you think it should be completely free, perhaps with an early release exclusively for backers? Folks, I just don’t know, I need your opinions! Please comment!

In a version of Zombie Sandcastle that I would describe as anywhere near finished (i.e. not the current version) the player will begin with a building phase, where they get a bit of time to sculpt their sandcastle and place their survivors within it.  However, in the demo I have running there's no building phase, I simply supply the castle pre-built. Which means I get all the castle designing fun. Not wanting to let this little proof of concept go stale I've put a new castle design in the game, which I'm quite taken with. Here it is: 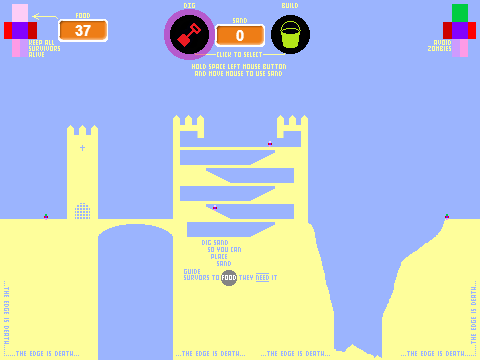 If you've every fancied yourself as a castle designer then sketch one up and send it along to me, it would be great fun to see how other ones play.